Having been treated to a dinosaur last time in taxon of the week, this week I’ve decided to go for an obscure Palaeozoic fish.  This fish is pretty obscure even for a Palaeozoic fish; so obscure, in fact, that it doesn’t even have its own Wikipedia article.  I speak, as you’ll know if you bothered to follow that link, of the Devonian jawless fish Euphanerops.

Euphanerops in all its fossilised glory (Sansom et al, 2013)

Loathe as I am to introduce even more palaeontological nudity to The Dinosirs, Euphanerops is a so-called ‘naked anaspid’, a group that look similar, but not the same, as modern lampreys.  The naked anaspids consist of a handful of taxa that are united by the fact that they look a bit like members of a larger group, the anaspids, but don’t have their distinctive bony scales.  Both groups look like they lie somewhere on the gnathostome stem-lineage, which we met when we looked at heterostracans a few weeks ago.  As we saw then, these stem-gnathostome groups are extremely important in understanding vertebrate evolution as they provide our only morphological information on how characters like jaws and paired fins evolved in vertebrates.

A lamprey-like reconstruction of Euphanerops. Ten points if you can spot the mistake before getting to the end of the post. (From miguahsha.ca)

The specific area onto which Euphanerops sheds light is the evolution of paired fins.  Jawed vertebrates today all possess paired fins, whether as traditional ‘fins’ or as limbs in tetrapods (although some, like snakes, have secondarily lost them).  Modern jawless vertebrates, the lampreys and the hagfish, have no paired fins, they have only single ‘median’ fins down their midline.  Unfortunately this gives us no information regarding how paired fins evolved, for all we know they may have just popped into existence.  One avenue of investigation in solving the puzzle is evolutionary developmental studies (evo-devo), where the development of modern animals is studied for clues.  This gives us intriguing hints, for example paired fins seem to develop in similar ways to both gill arches and median fins, suggesting a possible shared evolutionary origin.  They can also be induced to develop along a lateral line along the sides of the body.   However, if we want to know how the structure changed morphologically we have but one recourse.  To the fossil record! 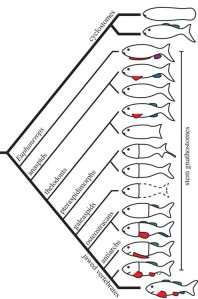 Fossils clear up the picture quite a lot.  The earliest ‘paired fins’ we see are in groups like the thelodonts and the (clothed) anaspids, but these are all paired ‘fin-folds’, fin-like structures that lie paired along the body in vaguely the same place as pectoral fins, but which have no skeleton supporting them. Some heterostracans, such as Pteraspis, also have bony paired fin-like projections from their head-shields, but it looks like these are just convergent adaptations rather than actually being fins. Osteostracans, a group with a wide array of fancy head shields, have the first paired fins as we know them today, with a skeleton on the inside (like your limb bones).  They only had pectoral paired fins (ie. the front fins of a fish, or your arms), and the skeleton was made of cartilage, but they were paired fins nonetheless, although some groups of osteostracan secondarily lost them again.  Later, in jawed groups such as the placoderms, we finally see the full complement, of pectoral and pelvic paired fins.

Anaspids (of the clothed variety) with fin-folds coloured in green (from Wikipedia).

Combined with the molecular evidence this progression from no paired fins to paired fin-folds to paired fins with skeleton has been used to propose an evolutionary mechanism.  The story runs that lampreys and hagfish have a single stripe of ‘fin-competency’ down their midline, where fins can develop.  This stripe was somehow double and spread onto the sides of groups such as anaspids, allowing paired fin-folds to develop on the sides as well.  These paired ‘fin-competency’ zones then began to interact with the developmental tissue that bone is formed from, leading to skeletonisation of the fin in later groups, and eventually to the complex fin skeletons we see today.

This figure shows the proposed spread of a line of ‘fin-competency’ first from the midline onto the flanks to create ‘fin-flaps’ in various places, and then interacting with other developmental tissues to create the familiar skeletonised fins we see today at the bottom (from Yonei-Tamura et al, 2008)

This seems like a good explanation, and fits the evidence well.  Euphanerops makes the picture a bit more complicated however.  The genus has been known for a long time, and is also interesting in that some fossils appear to preserve a lamprey-like gill skeleton, which would imply that this is ancestral for gnathostomes.  Our interests lie however in the realm of paired fins, and in 2013, a fossil was described as having paired fins.  In itself this is not unusual, as the similar anaspids sometimes have paired fins in a position roughly where pectoral fins are in modern fish.  Euphanerops however has paired fins where the anal fin is in a modern fish, ie. between the anus and the tail.  This state of affairs is not known in any modern fish, or in any other extinct ones we know of.

This has interesting implications for the evolution of paired fins.  It seems that rather than just following a progression from no fins to paired fins, evolution had a period of ‘experimentation’ with paired fins in different places before settling on the paired fins we see today.  This fits in with our overall picture of evolution: while it can be tempting to think that it ‘progresses’ towards an aim, in fact it occurs piecemeal, leaving behind a mosaic of different ‘experiments’ with morphologies.  It’s also worth noting that lines of fin competency idea of fin evolution mentioned before isn’t overturned by Euphanerops and its paired fins, but our picture of paired fin evolution is broadened. 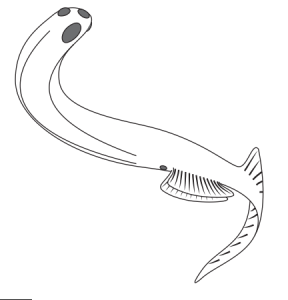 So, far from being merely an unclothed anaspid and a Twitter handle that rolls off the tongue, Euphanerops and its paired fins have much to tell us about both paired fin evolution and wider evolutionary principles.  Like Limusaurus last week it also illustrates how palaeontological and molecular methods can be used in a synthesis to better understand evolution.   Pretty impressive all round for a fish that not even Wikipedia loves*.

*But I love you Euphanerops!.

Johansen (2010) Evolution of paired fins and the lateral somatic frontier.

In the spirit of Ryan’s last TOTW, this week we will be looking at a member of the group of animals that my current work focuses on: Pteraspis, a heterostracan from the Early Devonian period.

The heterostracans were a group of armoured jawless fish, or ‘ostracoderm’, which lived in both saltwater and freshwater environments from the Ordovician to the Devonian period.  They were notable for their characteristic armour, with which they evolved a wide range of forms during their existence: some encased in box-like plates, others in smaller tesserae, some with flattened bodies, others with bizarre pointy nasal structures.  I’ll probably be subjecting you to a post on heterostracan morphological diversity later on, so don’t worry too much about taking notes.

Various types of heterostracan. Pteraspis is in the bottom right. (from Wikipedia)

Heterostracans are important to palaeobiology because, despite being jawless themselves, they lie somewhere on the ‘stem’ of the phylogenetic tree of the gnathostomes, or jawed vertebrates.  In the phylogeny below, the only two living clades are the gnathostomes (jawed fish, including us), which have jaws, paired fins and a bony skeleton, and the cyclostomes (hagfish and lampreys), which have neither jaws, paired fins nor bone.  This means that fossils are the only way we have of learning about how these characters evolved.  Heterostracans themselves are particularly interesting due to their bone, one of the first occurrences of this tissue amongst vertebrates.

A cladogram of vertebrate relationships. Note how all stem gnathostomes are jawless . Extinct groups marked with a cross. (from Purnell, 2002)

Enter our hero, Pteraspis.  This 20cm long animal is pretty famous as heterostracans go, and can usually be found swimming his way through any marine Devonian diorama (there’s a particularly good one in the National Museum of Scotland, Edinburgh).  The most striking thing about Pteraspis initially is its large bony head shield.  This is characteristic of all heterostracans, although the types of plate forming it and the shape vary dependent on the species.  Characters peculiar to Pteraspis and related genera are the long rostral (ie. nose) section and the large dorsal spine.  Also worth noting are the characters it lacked.  It had no paired fins, although it’s been suggested that the two wing-like protrusions coming out of its head shield served a similar function.  It also had no jaws or teeth.

A reconstruction of Pteraspis (from Wikipedia)

As the vast majority of living vertebrates have jaws and teeth, it might be quite hard to imagine how Pteraspis would have fed. The two groups of living jawless fish- hagfish and lampreys- have highly specialised mouthparts: the former for deep sea scavenging and the other as a ‘sucker’. Heterostracan mouthparts aren’t similar to either of these however, and they also have a more generalised swimming body plan; one thing they do have though is a series of oral plates.  These were parts of the head shield (not teeth!) that lay over the oral cavity.  Many functions have been suggested: scooping sediment, grabbing onto prey and suspension feeding.  Patterns of wear seem to exclude scooping and tiny little outwards pointing denticles on the plates would have prevented big prey from entering the mouth.  As such it seems that heterostracans like Pteraspis would have suspension fed on small animals, like many groups of animal today. 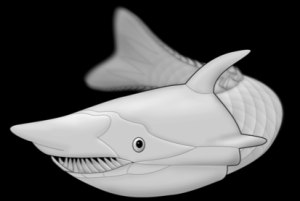 A heterostracan similar to Pteraspis giving us an oral platy grin. (from Purnell, 2002)

Pteraspis and the heterostracans have a lot to tell us about how the jawed vertebrates evolved.  They possess bone, but no jaws or paired fins, immediately telling us that these characters of the gnathostome body plan didn’t evolve together.  Although we’ve not really discussed it here, the structure of their bone itself can also teach us about the evolution of bone, and how it came to prominence as a tissue. These animals, completely different to anything living in the oceans today, also present their own mysteries, such as how they fed without jaws.  We’ve only briefly talked about heterostracans here, but fear not! There’s plenty more to talk about in the future.